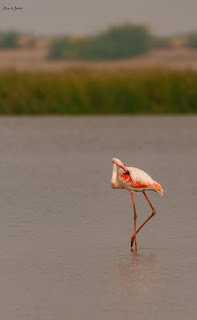 Many would love to do just like migratory birds: live an eternal summer. But migration is not much fun: it is a real challenge. Many dangers threaten the birds during the journey: storms, predators, disappearance of their usual stopover places where they are used to find rest and food, etc.

But how do the birds know where to go? Birds can use the sun, for example, which means that they permanently "know" what time it is, in order to know the right direction on the basis of the sun's position. They are also sensible to the ultraviolet rays which penetrate the clouds but are invisible for human beings. Even the nocturnal birds use the position of the sun at sunset to know their position.
Nocturnal birds also use the stars. This has been proved by letting birds fly in a planetarium and changing the stars' position.

Another tool is the earth's magnetic field (earth's north and south magnetic poles). Some birds, like pigeons, have a small zone in their brain made of magnetite (magnetic mineral), just like a small compass. But other scientists think it's rather in their eyes that some birds have a system which indicates them where the magnetic north is.
Of course, birds also use their knowledge of the landscape: they follow rivers, valleys or roads, or locate themselves with particular mountain peaks.

Now with global warming, the migratory birds are facing bigger issues day by day and their survival rate during migratory period is slowing down.