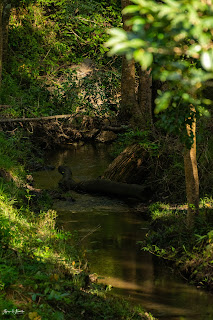 The girl was born in a big city. She has been around a sea of people as long as she has known life. But life had something else planned for her. After spending more than 20 years in concrete jungle, her work took her to some other jungle...the real one. Here she used to wake up to the birds chirping instead of car honking and instead of sea of people she had greenery and beautiful animals surrounding her.

This is the place where she finally found the love of her life. There was no going back. This jungle became her new home.

Years later she came back to the city to see her parents for a few days. The city had now grown beyond its capacity. Instead of thousands, now she could see millions of people. There were cars everywhere which made it impossible to walk on the roads. The air was so polluted, the sky was barely visible anymore.

The same place that she called her home for most of her life now felt alien. The city that she grew up in, now suffocated her. Her lungs, now used to clean air, struggled to breathe.

The pollution, the population have robbed her off her childhood home. She went back, to her new home, where she can breathe again.

This isn't just a random story. This is a story of my friend but sadly becoming more and more common among the next generation.
at January 16, 2020
Email ThisBlogThis!Share to TwitterShare to FacebookShare to Pinterest
Labels: Nature