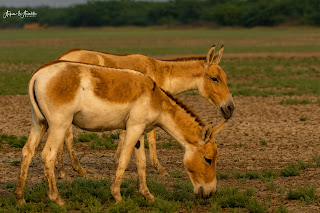 Some days back, I had the pleasure of seeing this glorious animal called- Indian Wild Ass. It's shiny fur and elegant walk enthralled me. When I realized that Little Rann of Kutch and adjoining area is the only place to boast this animal, it left me disheartened.
First census of the wild ass was done in 1940, when there were an estimated 3,500 wild asses. But, by the year 1960, this figure fell to just 362, it was then classified as a highly endangered species. In the years 1973 & 1976, Rann of Kutch and adjoining districts were taken up as the area for conservation for this sub-species also known as Khur.
In 1998, the wild ass population was estimated at 2,940, by the year 2004 it has increased to an estimated 3,863. A recent census conducted by forest department in 2009 has revealed that the population of wild ass in the state was estimated to about 4,038, an increase of 4.53% as compared to 2004. Recently in 2015, the current census of the Indian wild ass population has increased to more than 4,800 individuals in and outside of the Indian Wild Ass Sanctuary.
Currently the Wild Ass is listed as Nearly Threatened in Endangered species list. Hopefully the efforts of the forest department continue to succeed and the wild ass population continue to grow
Source- https://en.m.wikipedia.org/wiki/Indian_wild_ass