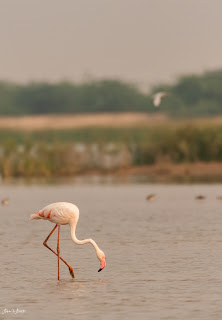 Due to wether changes, Flamingos have become migratory birds. When the weather pattern changes, the local resident bird species are the first to adapt. But the migratory species travel thousands of miles over weeks or even months so that they can reproduce and feed their cheeks, only to find that there is no food left for them.

Due to global warming, the migratory pattern of the flamingos has become unpredictable. Human establishments have encroached over most of the water bodies suited for these birds. Climate change is also reducing their food source dramatically.

The story isn't true only for flamingos. There are many different animal species on earth who migrate annually or semi annually at a specific time in search of better food source. All these species are suffering due to climate change.
at December 31, 2019
Email ThisBlogThis!Share to TwitterShare to FacebookShare to Pinterest
Labels: Birds
Location: Little Rann of Kutch, Gujarat