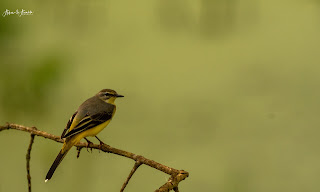 I have always envied the birds for their flight. I mean, humans also have the option of taking a flight now but then it's still not so easy.

The cost for humans for the flight is alot but also the environment pays everytime we use this option. Travelling by aeroplane may only account for 2% of total global greenhouse gas emissions, but those 39.4 million annual flights pump out toxic nitrogen oxide, cancer-causing exhaust particulates and carbon dioxide. But, the total global warming impact of each flight is thought to be around twice as high as the CO2 emissions alone. At flying altitudes in the upper troposphere and lower stratosphere, these outputs produce a range of climatic effects, multiplying the plane's environmental impact. For example, nitrous oxide causes the formation of ozone — a greenhouse gas that warms the local climate — but at the same time undergoes reactions which destroy methane, thereby removing another greenhouse gas from the atmosphere.
Even though less than 20% of human population has flown, with the increase in globalization and resultant traveling, the number of flights are expected to double by 2037.

A number of commercial airlines are already experimenting with using biofuels to fly and the International Air Transport Association predict that a million flights will be powered by a mixture of biofuels and conventional fuels by 2020. These aren't an ideal solution, since biofuels can be environmentally problematic in themselves, and anyhow it would take a huge chunk of the world's arable land to grow enough crops to fuel all the world's planes.

Till the time, we are able to create carbon neutral travel a possibility, we will have to pay a heavy cost of being globe trotters.