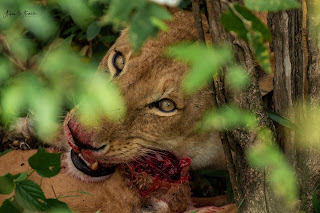 We were roaming around here and there. A message on radio and we hurried to the destination. There was silence all around. It was just another jungle scene. Impalas and Topis grazing the vast savannah under mid morning sun. It couldn't be more mundane. But we sensed something else, tension hanging in the air. And heard hushed voices saying 'a lioness is stalking from behind a bush' far away. So we sat there, waiting.

It was a long wait. Untrained eyes could not have predicted what was going to happen next. The silence and the calmness was almost engulfing. Even the herbivores had no clue what was lurking from behind those bushes.

Then I saw her. A splash of dull greyish yellow and a pair of eyes, still, full of concentration, trained on the prey. In a split second she started chasing. The whole herd of scared herbivores ran for their life, scattered all around. But the lioness had her target fixed. Her gaze didn't shift for even a second from her prey. She spotted the weak link from far away. A few seconds of chaos, and it was over. A young Topi had already lost his life.

We posted a photo of this young Topi few days back, photo of the last moments of his tiny life. The next I saw him was when he was cut to pieces, bloody, lifeless, under the strong hold of the lioness.

But life is not all grim. It's beautiful and it is constantly regenerating itself. We will see that in tomorrow's post.
at December 03, 2019
Email ThisBlogThis!Share to TwitterShare to FacebookShare to Pinterest
Labels: Circle of Life, Lion
Location: Maasai Mara National Reserve, Ngiro-are Road, Kenya