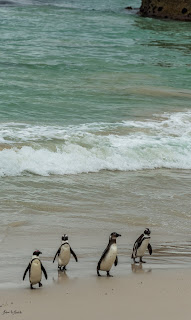 African penguins, as a species are struggling. The population has declined significantly over the last 100 years due to human activity related pressure. South African government is currently trying to implement multiple conservation measures to save the remaining population of the species.

Many of the natural habitats of the species have been declared as protected areas and human activity, including fishing, ship route and recreational activity is restricted in those areas. In order to raise fund for conservation efforts, some of these areas (for example, Boulder's beach, Betty's Bay etc) have been opened to the public for viewing these beautiful creatures and spread awareness for their conservation. However, tourists are not allowed to interact with the birds.

Whether the conservation measures succeed to revive their population is yet to be seen. However, thanks to this effort, they are now getting some sort of protection from a bleak future and some people, like me, are able to experience seeing them from up close in their natural habitat.

Until a few months back, I never thought I would have the privilege of seeing these beautiful and unique birds in their natural habitat unless I go to polar regions. If the population continues to decline at the present rate, the species 'African penguins' will be a thing of history sooner than we realize.
at November 22, 2019
Email ThisBlogThis!Share to TwitterShare to FacebookShare to Pinterest
Labels: Animals, Birds, Penguin
Location: Cape Town, South Africa