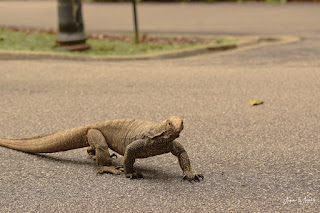 When I visited Indonesia, I saw what a beautiful country it is. Indonesia is blessed with so much natural beauty, incredible wildlife and cultural diversity. There are places or islands hardly known to the outside world with serene, untouched nature.

Komodo island, the home for vulnerable Komodo dragons, the biggest lizards in the world is not just fascinating due to its unusual wildlife. The island also has rusty volcanoes, pristine beaches and forests. The island and its unusually large inhabitants weren't even known to the outside world until a few decades back. But once it was known, there was no stopping thrill seeking humans. With steep increase in tourists all over the world, came all the negative effects of human intervention.

The dragons are endemic to the island. The island is their critical habitat. There are only about 4000 of the dragons remain in the wild. Too much tourism has disturbed their habitat so much that now Indonesian government is thinking of closing the island to all humans for sometime. The time is to allow the ecosystem to heal itself and revive.

I didn't visit Komodo island when I went to Indonesia. But I thought, there can always be a next time. Now I am not so sure anymore. But I hope the Indonesian government's efforts pay off and at least some day I see a thriving Komodo dragon population.
at October 16, 2019
Email ThisBlogThis!Share to TwitterShare to FacebookShare to Pinterest
Labels: Conservation, Human Intervention, Nature, Wildlife
Location: 1 Cluny Rd, Singapore Botanic Gardens, Singapore 259569