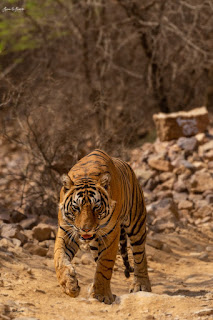 Yesterday I woke up with the sad news that this handsome guy, Veeru is dead. He was killed in a territorial fight with an adult male tiger called Fateh.

Veeru wasn't the first tiger I have seen. But he was among those very few I spent hours with. And he was the one I had the privilege to photograph the most! Veeru definitely was one of those few that my generation was fortunate enough to see in the wild. He was not even 3 years old! For tigers, by the time they turn 2 years of age, generally they separate from their mother and their siblings. But this one didn't. His bond with his brother Jai (they were called Jai Veeru for a reason) was unusual to say the least. Just 3 months back I had seen them together.

Territorial fight among tigers aren't uncommon, neither is fatal injury because of that. So everyone is saying it's natural death and we can't really help it. But is it completely true? Tigers are territorial and solitary animals. A male tiger may need an area as large as 80-100 sqkm. When tiger population rises in a forest, soon the limited space in that forest cannot provide territory to all tigers and they start fighting. And when a sub adult tiger has to fight with an adult strong tiger, most of the times, they don't stand a chance. They either succumb to their injuries, or are forced to migrate to areas outside of the protected areas of the forest, closer to human habitation, where they often become victim of human animal conflict.

So even though it is a natural death, today I still feel a tinge of guilt along with profound sadness. Because I know that we forced him into this unequal unfair fight by encroaching into his home. We didn't leave him enough space to lead a normal safe life. We are responsible, in some way to separate him from his brother.