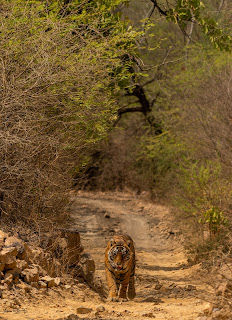 A fellow wildlife lover friend (https://tigersinthewild.org/blog/) once wrote an FAQ on tigers. And not surprisingly, one of the top questions we wildlife enthusiasts get asked is 'aren't you scared? Being so close to a wild lion or leopard or tiger sounds dangerous'!! So I thought of checking on some numbers.

In the first half of 2019, The Hindu reported that 224 people were killed by tigers in the last 5 years. Compared to 130 million Indian population, this number is miniscule. On an average 400 people die in vehicular accident daily in India (a news by The Economic Times, 2018). So we have a 3,260 times higher chance of getting hit by a car than being attacked by a tiger.

In a little over 100 years, wild tiger population in India has declined from 100,000 to less than 3,000. 97% of the population has been wiped out due to human activities and human greed (wild tiger population in the world is <4,000). Even in recent years, more than 100 wild tigers are killed worldwide every year for illegal trade alone. In addition to that human-animal conflict, electrocution, poisoning, lynching, roadkill, habitat loss cause many more tiger deaths every year.
And we say tigers are dangerous!!!!!!

The statistics is similar for any other animal anywhere in the world. I wanted everyone to understand this statistics rather than drawing conclusions based on gut feeling. And the statistics tells us that we are not only safe in the jungle, but actually safer than we ever feel in the city.