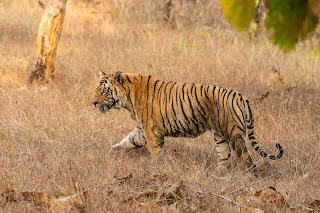 Let me tell you a story today, a story of a tiger. Not any tiger, but of Matkasur, the King of Tadoba, one of the most well known tiger reserves in India.

Matkasur's story will be incomplete without the mention of Maya, the most beautiful tigress and Queen of Tadoba, also sweetheart of Matkasur. Their tryst began when young Matkasur wanted claim to the territory of Gabbar. Whichever tiger could claim the territory will also earn the right to mate with Maya. There already had ensued a battle earlier between Gabbar and Matkasur where Matkasur had lost. But now he was battle ready and starting his prime years while Gabbar was almost at his end. This time Matkasur was dominant and emerged victorious. He reigned over the core area of Tadoba, the pandharpurni lake and obviously has the rights to mate with the famed Maya. Now the couple has a litter of their own and raising it in this area.

It seemed like everything was going great but Chhota Matka, Matkasur's own son with Chhoti Tara, is threatening his territory. In their first battle, the father's strength and experience won but how long till life comes a full circle?
at August 16, 2019
Email ThisBlogThis!Share to TwitterShare to FacebookShare to Pinterest
Labels: Tiger
Location: Tadoba Andhari National Park, Chandrapur, Maharashtra 442401, India