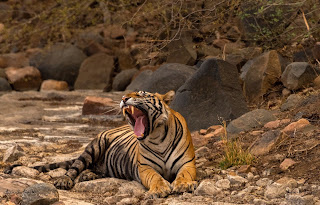 Some species are called the keystone species because of their role in the ecosystem is so crucial that their extinction (or even a significant shift in their population) can collapse the whole ecosystem. One such example is sea otters from the Pacific coast.
Let's look at the ecosystem here. Kelp forests are the breathing, feeding and breeding ground for a number of species. Fish come to these kelp forests to take refuge from bigger predators like whales, sharks, sea lions, seals etc and also to feed on micro organisms thriving on kelp forest. Sea birds then feed on these fishes. Sea urchins are voracious eaters of kelp. They eat through the holdfasts that anchor the kelp to ocean floor and then kelp is washed away to open sea or land.
Sea otters are large weasels flourishing on giant kelp forests. They generally prey on sea urchins, shellfish, crabs and some fishes. Sea otters need a lot of food (upto 9 kgs per day) to fuel their fast metabolism to counteract energy loss due to cold environment. This in turn keeps the sea urchin population in check. Not many other sea predators can feast on sea urchin so easily because of their protective shell and thorny exterior.
Sea otter's fine fur was in high demand in Chinese market. Within 40 years Russian, American, Spanish and British hunters reduced sea otter population from half a million to merely 1000-2000. With the sea otters gone, no other species could keep the sea urchin population in check. The growing sea urchin population ate through the entire kelp forest. When the kelp forest disappeared, so did all the other micro organisms, fishes and birds depending on them. The entire ecosystem collapsed. Even though in the interim, sea urchins flurished in absence of sea otter, in the end, nothing remained, not even sea urchins.
"The fact that the fashion tastes of Chinese 200 years ago, met by traders from the other side of the world, are impacting in bald eagle populations 7,000 kilometres away on the BC coast indicates the complex interactions between biophysical and human systems."
Kelp forests don't just sustain marine ecosystems, underwater forests provide as much as 50% oxygen to the environment. With the kelp forests gone, eventually we will follow, may be not long after. Our science is not yet advanced enough to know functions of each species and interconnection of all species in the ecosystem. This is high time to control before we cause one such major collapse which is irreversible.
Source:
Environmental Change & Challenge by Philip Dearden & Bruce Mitchell