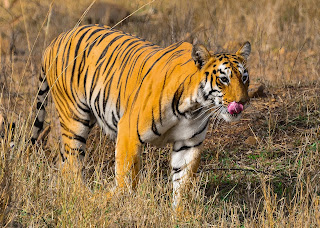 Maya, one of the most famous tigress, holds a special place in the hearts of all tiger lovers. She was part of litter of 4 cubs, growing up with 2 sisters and a brother, she was the most vivacious of them all.
She dominated over her siblings and became the Queen of Tadoba, a famous tiger reserve in Maharashtra.

Maya was the desired mate for many tigers and as she shared her territory with 4 tigers, there was bound to be fight for her. The most famous of them were Gabbar and Matkasur. Maya was raising her second litter, after tragically losing all cubs in her first litter. Her cubs were around a year old and still had about 6-12 months before they became independent and left in search of their territory. Tiger mothers are very protective and loving towards their cubs as there are many threat for the cubs, and their survival chances are very low.

Both Matkasur and Gabbar were vying for Maya's attention and were serious danger to her cubs. Once Matkasur had charged one of the cubs and the cub was seen running away scared. Maya was desperate to protect her cubs. Rather than fighting the tigers which risked her wellbeing as well as of the cubs, she moved the cubs away. It is believed that she sensed that survival chances of cubs were higher if they were away from the male tigers. Maya was also seen spreading her scent everywhere as if to attract these adult tigers to herself so that they are not aggressive towards her cubs. She was soon seen mating with the tigers and it seems they had forgotten about the cubs. The cubs were seen killing small animals and the strategy seems to have worked.

As Maya continues to create more stories, one thing is for sure, she will become legendary, a folklore for decades to come.
at June 23, 2019
Email ThisBlogThis!Share to TwitterShare to FacebookShare to Pinterest
Labels: Mother, Tiger
Location: Tadoba Andhari National Park, Chandrapur, Maharashtra 442401, India