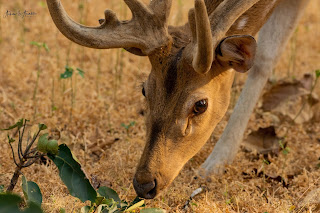 Today is Global Environment Day. But what is environment? Oxford dictionary defines it as 'The surroundings or conditions in which a person, animal, or plant lives or operates'. So is it enough to celebrate / care about that environment only one day in a year? What about the rest of the 364 days?
Let's look at some statistics:
1. Earth is estimated to be 4.5 billion years old. Life on earth, on the other hand, is said to be 3.5 billion years old. We humans have come to existence only about a 200 thousand years back. Not through any miracle, through evolution of different species over billions of years, with support from interactions of every living and non living entity in the environment in perfect harmony.
2. Over the millions of years of evolution, the nature has created more than 20 million  different species. Humans, with all our intelligence have been able to discover only 1.8 million of those so far. So 90% of the mystery of the natural world still remains unknown to us, and so does its interconnection and its role in the larger eco system.
3. Human interference, in the last century has driven 1 million species to extinction or near extinction so far. We have already killed 60% of the planet's wildlife.
4. The planet is already 1 degree celsius hotter than late 19th century. And the temperature is rapidly rising. Most of the warming happened in the last 49 years or so. Scientists say by 2050 the arctic regions are estimated to be largely free of ice in the summer, leading to rise in sea level creating many tsunamis and mayhem. Higher temperatures will lead to irregular rain pattern, affecting every living organism, including humans negatively.
5. Excessive usage of single use plastic is choking the oceans. By 2050, the oceans will contain more plastic than fish, killing millions of animals every year.
6. Exponentially growing human demand have already destroyed half of the world's rainforests that took millions of years to evolve, teeming with biodiversity, the second biggest producer of life supporting oxygen on the planet.
7. The biggest reserve of water and oxygen, the oceans are dying because of pollution,  excessive use of chemical fertilizers, oil spills, plastic, industrial waste, human sewage.
8. We created atomic energy without understanding the full implications of it, which led to disasters such as Chernobyl. We polluted the 1000 sq miles area, made the land, air and water uninhabitable for humans for 20,000 years, longer than the existence of human civilizations.
9. Half of the Great barrier reef, a natural wonder, is already dead due to massive rise in ocean temperature. The damage may well be irreversible in those coral reefs rich with marine life, evolved over a million years
10. An oil spill (Deepwater Horizon oil spill) in the Gulf of Mexico killed or mutated thousands  of marine life, birds, destroyed corals. We created the pipelines, without accounting for the disaster scenario. The inevitable happened, leaving the oil in the ocean for years to come, threatening life of every living species in a 1300 miles of shoreline.
There are many more alarming statistics like this. With all our science and technology, how much of the complex natural world do we understand even today? Our lack of knowledge has caused irreversible damages to the environment already. How much more can the environment really endure? Every living and non living entity has a role to play in sustaining the ecosystem. How can we replace the functions performed by those 1 million species in the ecosystem that have or will soon cease to exist, thanks to us? When a part of the ocean turns dead, our food source depletes, fishing industry takes a hit. When rain pattern changes, agriculture gets affected. Air and water pollution doesn't just kill animals, it affects human health as well. Human population now stands at 7.5 billion in the world. Scientists predict us to grow to 10 billion globally by 2050 or 2100 at the latest. Can this damaged environment take care of 10 billion humans, even the basic demand for food oxygen and water? If not, then we need to start caring about the environment more than just one day in a year.