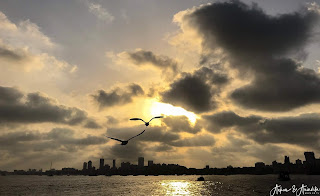 A game many of us played as children is eating small pieces of paper. To hide something from our parents or siblings, or to pull our best friend's leg. But it was always paper. Imagine if you had to eat pieces of plastic!! And not as a game, as part of your regular diet, unknowingly.

We humans create nearly 10 million tonnes of plastic waste every year. Plastic takes hundreds of years to get naturally decomposed. So the waste that we generate are either burned, producing harmful greenhouse gas or thrown into landfills or leaks into the world’s oceans to be ingested by sea birds, fish and other organisms. Plastic kills thousands of birds, animals and fishes every year. The consequences of our actions are affecting the farthest reaches of the planet. Some numbers to note:
1. It is now believed that there are 5.25 trillion pieces of plastic debris in the ocean. Of that mass, 269,000 tons float on the surface, while some four billion plastic microfibers per square kilometer litter the deep sea.
2. 100,000 marine creatures a year die from plastic entanglement and these are the ones found.
3. Approximately 1 million sea birds also die from plastic.
4. One piece of plastic can harm many animals. The dead animal decomposes and the plastic is released to kill another animal

The harmful reaches of plastic do not stop at that, it is also finding its way back to human food chain. Just think, we are digesting tiny pieces of plastic through seafood and other food items. Looks like we have graduated from eating paper as a child playfully to eating plastic as part of our regular food intake!!
at June 11, 2019
Email ThisBlogThis!Share to TwitterShare to FacebookShare to Pinterest
Labels: Nature, Plastic