Salmon and the ecosystem 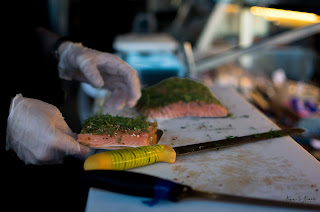 A few years back I got the opportunity to visit one of the most famous fish markets in the world. I was awestruck by the variety of different seafood options available there. My less informed younger self could only understand its implication to my adventurous tastebuds. I couldn't fathom what it meant for anything else, like the environment. There were many species I had never even heard of. Who knows, may be there were some endangered species too, falling prey to the illegal seafood market or exploiting legal loopholes of 'Total Allowable Catch (TAC).

Endangered species are those who are at serious risk of extinction due to sudden rapid decline in population or loss of its critical habitat. For many of such species, only a handful are remaining in their wild habitat. But there could be some species at risk even if their number is still in millions. Their extinction could also have devastating consequences to the entire ecosystem. Let's take an example of Salmon.

According to WWF, there has been a 50% decline in atlantic salmon population over the last 20 years. Global atlantic salmon catch fell 80% from 1970 to 2000. What is causing this major decline in salmon population? Human activities. Salmon is considered to be a nutrient rich tasty elite food source for millions of people around the world. Millions of people's livelihood revolves around salmon and salmon harvesting all over the world, commercially and otherwise.

Salmon stay in ocean but come to river water to spawn. Commercial fisheries and fishermen around the globe use fish wheels to scoop out migrating salmon out of river water. Result of this over-fishing for decades - today less than 1% salmon come to river waters to spawn. Ocean and river pollution, global climate change also contribute to less reproduction ability in salmon. But how does this decline affect us except for our palate?

Salmon spends anywhere between 2-7 years in ocean environment before coming to river water to spawn and die. When they die, the rich nutrients of the depth of ocean is released in the environment. Salmon provides food and nourishment to not only aquatic plants, insects and other fish, but also the land environment on which we humans also survive. Many birds, bears and raccoons feast on salmon and when the fish is digested, the nutrients are distributed on the land in form of feces providing nourishment to the plants and trees. We take away this food, we take away the oxygen producing forests that depend on this fertilizer to grow.

Salmons don't only collect nutrients, they also collect pollutants from the ocean and concentrate them in their bodies, reducing ocean pollution affecting millions of other species.
The harmful effect of our own doing has now started to make its way back to us. We still have time to reverse this. After a while, it may well be too late to act.
Source:
http://worldwideaquaculture.com/depleting-salmon-population-causes-recovery-process
Environmental Change & Challenge by Philip Dearden & Bruce Mitchell