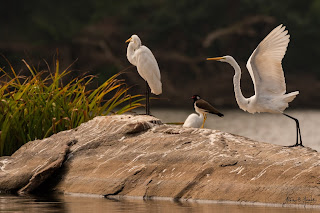 The United Nations Genocide Convention defines genocide as "acts committed with intent to destroy, in whole or in part, a national, ethnic, racial or religious group". Sadly, this definition is only applicable of atrocities humans commit against other humans. In last 45 years, humans have killed 60% of earth's wildlife. What do you call it but a genocide?
The rate of human development is causing the highest form of destruction ever witnessed in history. Out of the 8 million animal and plant species on Earth, 1 million are threatened with extinction. These warnings are coming out of a report by the Intergovernmental Science-Policy Platform on Biodiversity and Ecosystem Services (IPBES).
How will we ever pay for these sins and the ones we continue to commit against those innocent creatures?
at May 26, 2019
Email ThisBlogThis!Share to TwitterShare to FacebookShare to Pinterest
Labels: Birds, Wildlife